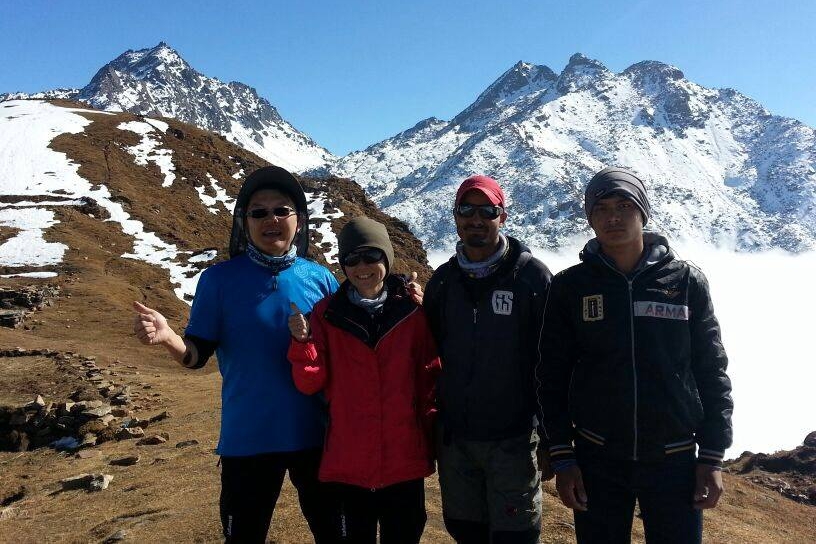 Langtang Valley Trek begins with the drive along the Trishuli River north of Kathmandu, through Trishuli Bazaar; we reach to Dhunche and finally reach Syabru Bensi, a Sherpa village and farmlands of the people. Langtang valley is popularly known as the valley of glacier trek is situated at 19 miles north of Kathmandu.

Langtang Valley Trek begins with the drive along the Trishuli River north of Kathmandu, through Trishuli Bazaar; we reach to Dhunche and finally reach Syabru Bensi, a Sherpa village and farmlands of the people. Langtang valley is popularly known as the valley of glacier trek is situated at 19 miles north of Kathmandu.

Despite being very close to Kathmandu, the Langtang Valley is as wild as any Tibetan highlands with the Idyllic rural landscape.  The whole Langtang valley trek is dominated by Mount Langtang Lirung (7246 m) and offers pine forest, swift mountain streams, rugged rock and snow-capped peaks, grassy down and meadows. The people living in the Langtang region are certainly Nepalese but being the descendant of the Tibetan origin, they look like the Langtang region, a picturesque area in the Himalayas of Nepal offers various exhilarating trekking trails providing much more than what trekkers actually expect. Situated to the north of Kathmandu valley and bordering Tibet, the region is a must trek for trekking enthusiasts.

One of the major attractions of Langtang region is its abundant snow glaciers. With over 70 glacier basins, it is one of the richest regions in Nepal for glaciers. Gosainkunda, the famous sacred lake is situated in Langtang region. High mountain passes add more to make trekking trails an exhilarating adventure. Langtang valley is so naturally beautiful and it resembles heaven. The Langtang valley is also known as a treasure house of alpine plants and the whole valley gets covered with flowers during the summer.

So, Langtang region is one of the most popular trekking regions for those wishing a short trek from Kathmandu into the Himalayas influenced by Tibetan lifestyle. The whole Langtang valley trek is accompanied by beautiful bamboo forests, varieties of rhododendron, majestic waterfalls, etc., which makes everybody’s trek a memorable one.

If you also prefer to trek whole Langtang region, contact with us. We will try to do our best to make you trip marvellous.

On our very first day, we take a local bus to Syaprubesi (1550m) which takes 7-8 hours’ drive from Kathmandu. We shall enjoy the scenic drive making through Trishuli valley of the Himalayan views and mountainous lifestyle through the terraced fields and rustic villages.

From Syaprubesi our trail trek starts and we head toward Bridhhim (2229m) where we shall be accompanied by beautiful green forests, birds and other small animals, crossing several suspension bridges and tea houses on the way. We have a very short trek but the trail goes straight up a steep one.

We have a similar trek on this day like the previous day and by this day we shall have the few ideas about our surroundings. We have a short trek of 4-5 hours to Lama Hotel (2500m).

Today also we will have a pleasant walk as we follow the trail through rhododendron and pine forest until we reach Ghoda Tabela (3030m). This surrounding area is densely filled with wild habitat and many small babblers and lots of medicinal plants. After lunch, we will walk another few more hours on the scenic trail that takes us to Langtang village (3455m) where we shall be resting overnight.

Leaving the beautiful valley behind we trek towards Kyanjin Gomba (3817m) a principle monastery of the region. From here we will have beautiful views of Mt Ganchempo and Mt. Langtang Lirung(7227m).

Other than resting and have acclimatization we have the option to go hike around Tserko Ri (5150m) or Kyanjin Ri (4773m). Also, we can take a walk around Kyanjin Gompa enjoying the views glaciers, icefalls, birds and yaks.

We shall be heading back following the same trail that goes all the way downhill through the forest following the river. Passing by the ethnic Tamang settlements that follow the religious and cultural practices similar to the Tibetans. On this day we have a walk of around 6 hours.

On this day we have a trek of 5 hours which is easy as the trail follows downhill through the lush green vegetation.

We take the local bus back to Kathmandu following the same route as we had the one last time. And we end our journey reaching Kathmandu.