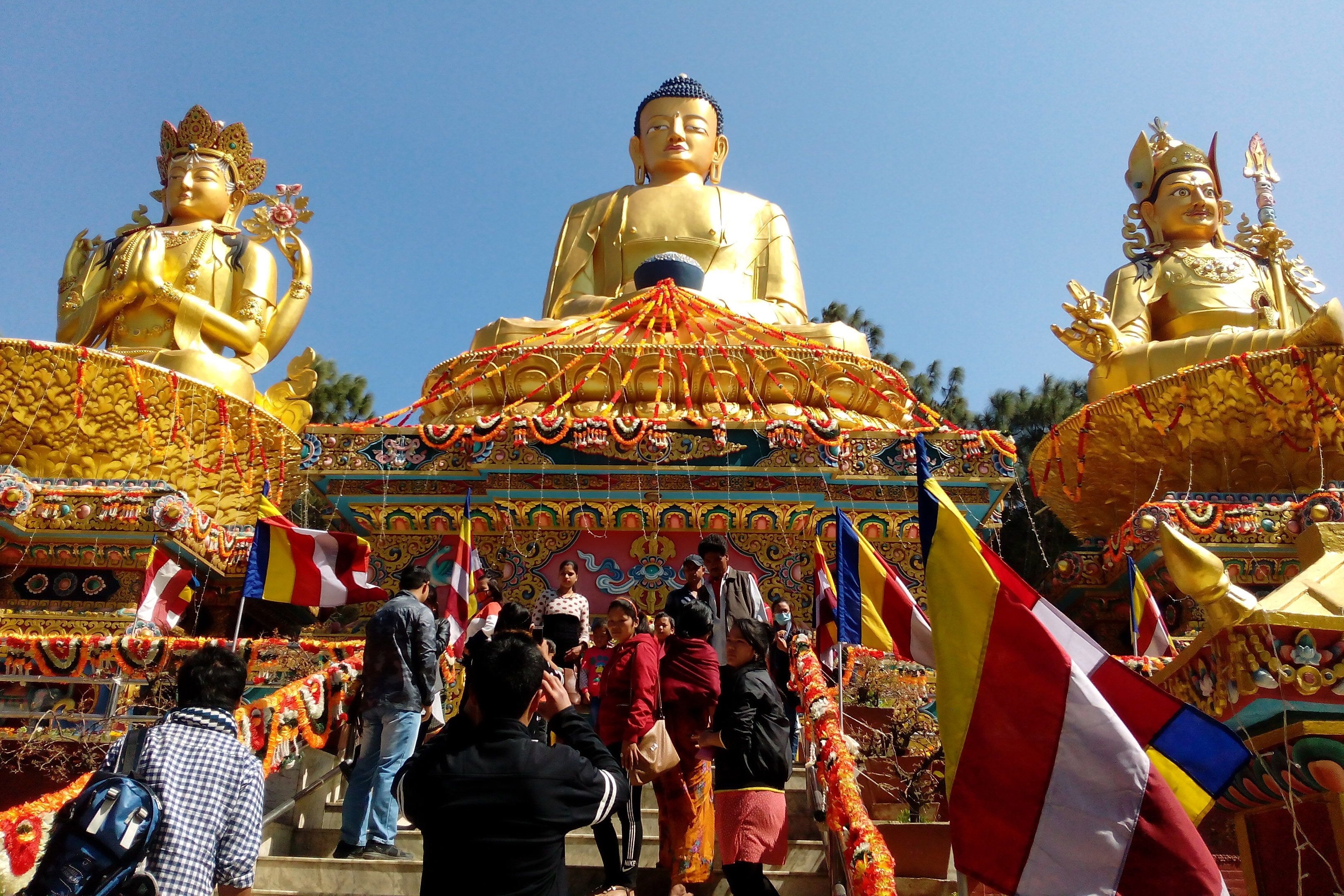 There are Buddhists all over Nepal and hence Buddhist monuments and monasteries all over Nepal. In Kathmandu valley, we have 2000 years old remarkable Swoyambhunath stupa and world’s biggest 1500 years old Bouddhanath Stupa. In the city of Patan is dominantly Buddhists and has places like Mahabouddha Temple and Hiranya Varna Mahavihar.

In the year 624 BC, in Kapilvastu (Nepal) Siddhartha Gautama was born as a prince. His father was King Suddhodhan and his mother was Queen Maya Devi. When he was sixteen he finished his education inside the palace and he married to Princess Yasodhara. King Suddhodan handed over his kingdom to his son Siddhartha. Prince Siddhartha and princess Yasodhara had a baby name, Rahul. When king Siddhartha was 29 years old he decided to renounce lay life. He left his kingdom and went to several well-known teachers to study the ultimate nature of reality. But their teaching method didn’t satisfy him and he set out to find his own path. Six years later he went to Bodhgaya near the Niranjan River and sat under a tree.

Lumbini, in the southern part of Nepal, is the greatest pilgrimage site for all the Buddhists all over the world. Lumbini today includes a pond where Siddharth (Gautam Buddha) was bathed after his birth and a temple which has images of young Buddha with his mother. There is also a Stone pillar named Ashoka Pillar which made by the famous Indian emperor Ashoka to mark the important sites related to Buddha’s life. Besides, there are many stupas in Lumbini made by many Buddhist countries of the world such as Thailand, China, Sri Lanka, Japan and Myanmar.

There are Buddhists all over Nepal and hence Buddhist monuments and monasteries all over Nepal. In Kathmandu valley, we have 2000 years old remarkable Swoyambhunath stupa and world’s biggest 1500 years old Bouddhanath Stupa. In the city of Patan is dominantly Buddhists and has places like Mahabouddha Temple and Hiranya Varna Mahavihar.

On the other hand, Namobuddha is also one of the famous Buddhist Pilgrimage sites which will take you to few more while travelling outside the city. We can also take you to the peaceful and beautiful lake city of Pokhara where you can visit the world peace stupa. Here you can see the tremendous view of the Pokhara city and Himalayas, You have also an option of boating in the cool Fewa lake water and after that, you will have free time to shop a great number of Buddhist objects and show pieces which may not be available on your native country.

On the first day, one of our company’s representatives will come to receive you and then transfer you to the hotel rooms.

The very next day we will pick up you for sightseeing tour of Kathmandu world heritage sites. Some of them are Swayambhunath Stupa, Bouddhanath Stupa Kathmandu Durbar Square, Pashupatinath, etc.

Sightseeing tour inside Kathmandu valley is not enough to know more beautiful aspects of Nepal, So on the third day, we will drive for the sightseeing in the Namobouddha for a night stay. The next morning we can enjoy the impressive sunrise and after breakfast, we will drive to Dhulikhel.

On the 4th day, we will reach the Dhulikhel. After seeing some of the special places of there we will drive back to Kathmandu overnight in a hotel in the city.

On the 5th day, we will take a morning flight to Lumbini, the birthplace of Lord Gautam Buddha. We will visit Lumbini, the garden of Lumbini, Mayadevi temple and other Buddhists monasteries made by different Buddhist countries.

On the 6th day is the day to drive to Pokhara and stay here for the night.

On the 7th day, we will relax and enjoy the peacefulness of the beautiful lake city of Pokhara. We will visit Sarangkot mountain viewpoint in the morning, boating in the lake in the afternoon and enjoy a short hike to World Peace Stupa. We will stay in Pokhara even this night also.

On the 8th day, we will fly back to Kathmandu. In the free time, we will go walking around and shopping and Overnight stay in Kathmandu hotel.

On the last day, we will take you to the airport for departure. last day of service.